Palestinian prisoners in Israeli jails use hunger strikes to protest against prolonged administrative detention without trial. This embroidery, based on an image by an unnamed illustrator, was disseminated widely among activists on social networks in an expression of solidarity with the mass hunger strike. The image endeavoured to raise awareness of the suffering of Palestinian women prisoners and their steadfast determination to attain their rights. The Arabic lettering reads ‘Samedoun’ (‘We are steadfast’).  The Hebrew lettering reads ‘Shabas’, the Israeli Prison Service. The panel was stitched in Oxford by Samar Alhallaq in 2013.  She was killed by Israeli shelling in Gaza in 2014. 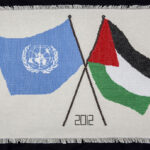