The Palestinian History Tapestry was exhibited at Scotland’s first Festival of Palestine between  9 to 16th October 2021 at St Columba’s by the Castle church in Edinburgh. Organised by Edinburgh Action for Palestine and the Palestinian community in Scotland, the Festival was a weeklong celebration of traditional music, ‘dabkeh’ folk dance, and entertainment.

A selection of hand-embroidered on canvas panels was exhibited celebrating the wonderful Palestinian tradition of handicraft. The exhibition told the story of the land and people of Palestine through the ages using traditional Palestinian embroidery.

Husam Zomlot, Palestinian Ambassador to the UK,  participated in the opening ceremony and welcomed guests in a recorded video message, reminding them of the strong links between Scotland and Palestine: “Scottish support for Palestine, the Palestinian people, the Palestinian struggle are simply inspiring and empowering,” Mr Zomlot stated.

Zomlot described the Palestinian History Tapestry as a “mind-boggling achievement” which “shows the beauty of our land, the depth of our culture, the intensity of our history and the strength of our attachment to our home.”

Ms Joanna Cherry MP and Mr Tommy Sheppard MP, both members of the Scottish National Party and long-time supporters of the Palestinian struggle, attended the exhibition and shared their support on Twitter. 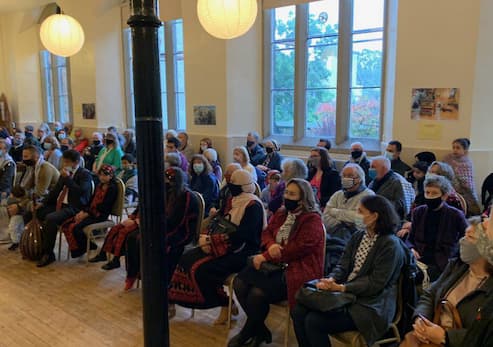 Read more about the PHT exhibition on the following sites:

Dear Supporters and Readers of the PHT Newsletter,

2021 is the 10th anniversary of the Palestinian History Tapestry Project. The Tapestry currently consists of over 100 embroidered panels recording an insufficiently appreciated history of Palestine and Palestinians, and it seems likely to be the largest collection of illustrative embroidery ever produced by Palestinian stitchers.

£43,000 has been raised through donations and sales of work to pay 46 embroiderers. Everyone else connected to the Project volunteers their time and contributions.

I am writing to let you know about changes that have been proposed to enable the Palestinian History Tapestry Project to build on its substantial achievements over the past 10 years. In October 2020 I wrote to members of the Project Steering Committee to say that I had decided that I should step down as co-chair of the Project, and that I had met with Jehan Alfarra (my co-chair) to see how we should go forward. We had discussed the advantages of Jehan having another young Palestinian co-chair, and we agreed that this provided an opportunity to establish unambiguously Palestinian leadership of the Project.

Jehan subsequently convened a small working group of Palestinians. This has met on two occasions to consider possible future arrangements for the Project, and has produced proposals. The working group also suggested that Ibrahim Muhtadi (our designer colleague, who lives in Gaza) should join Jehan as a co-chair to replace me. I am delighted to report that Ibrahim agreed to fulfil this role and members of the Steering Committee have welcomed this proposal unanimously.

The Palestinian History Tapestry Project has been very dear to me and I have no intention of stepping down completely. Specifically, I would like to continue working with the five field coordinators in commissioning additional panels. However, I feel that it’s time for younger people, but more importantly Palestinian people, to lead the Project into the future. Your support for the new leadership will be much appreciated.

A message from the new PHT project co-chairs

We would like to start by expressing our immense appreciation and gratitude to Jan Chalmers for bringing this very remarkable project, which has been a collaboration of love and solidarity, to life and for all her hard work and dedication to it over the years.

As Palestinians, we see culture as a very important and fundamental element in the preservation of our identity and heritage. Using skilled traditional embroidery, the Palestinian History Tapestry is a beautiful way of preserving and telling the story of the Palestinian people, their history, their traditions and their struggle under Israeli occupation.

While it saddens us that Jan has decided to step down as co-chair, we hope that with her ongoing support, we will be able to carry the project forward and we very much look forward to presenting this unique and vital history and art project to the world and giving it our all.

Pending legal and business advice, we hope to be able to bring the beautiful illustrations and designs of the tapestry’s various embroidered panels, which span different eras in the course of the history of Palestine, to the homes and lives of everyone who is interested in Palestinian art and history. From home accessories to clothing and gifts, our aim is to be able to transfer the PHT designs onto products available for supporters to purchase worldwide in the near future. We believe this would be a great step forward that would spread awareness about the project while providing income to Palesitnian women and artisans as well as sustaining the project in the long-run.

In February 2021, a group of people gathered to share their love and support for Palestine and Palestinian heritage.

Eman introduced the Project, how it started, what its aims are, and how people can help to support it. The talk was well-received by attendees, who appreciated the idea of the Project, especially considering the current circumstances in Palestine.

As the situation of COVID-19 in Australia is becoming stable at the moment and face to face meetings are slowly coming back, we plan to hire a stall to talk to people about Palestine and particularly this Project in upcoming multicultural festivals.

Palestinian embroiderers will continue to be commissioned to stitch additional illustrative panels relevant to events and themes, from the Neolithic period to the present. The latest addition to the tapestry is the Mona Lisa of Galilee and the cover page of a Palestinian passport.

HOW CAN YOU HELP?

People often ask “How can I help?”  We need funding, and this is mainly provided through donations and the sale of Palestinian artefacts, such as embroidery and carved olive wood. A wide-ranging selection of these items, all from Palestine, are available for purchase, as are limited-edition Giclée prints of selected Tapestry panels.  Raising general awareness of the Project can be promoted through talks, articles,  exhibitions,  and presentations.

Click here to donate. All donations are used to support the Palestinian History Tapestry Project, and to commission additional designs and embroidery.

Tuesday 30 June 2020 is the centenary of Britain’s transfer of Palestine from military to civilian administration. Sir Louis Bols, of the ‘Occupied Enemy Territory Administration’, handed over Palestine to Viscount Herbert Samuel, who was Jewish and a Zionist and had been appointed High Commissioner of Palestine.

Samuel signed an informal “receipt”, acknowledging that he had received “one Palestine, complete”, as described by Israeli historian Tom Segev in his book “One Palestine Complete”.

The abbreviation at bottom left of the letter stands for “Errors and Omissions Excepted”, but clearly not the error of establishing the basis for a settler colonial state, or the omission to consult the people on whose homeland the state was to be established.

Between 17 and 23 February 2020 the Lansdown Hall and Gallery in the textile town of Stroud in Gloucestershire, UK, hosted an exhibition of 40 panels from the Palestinian History Tapestry (PHT) grouped by themes – history, women, life, home, food, art and religion. The exhibition was visited by over 500 people, some from as far afield as France, London, Totnes, Derby, Edinburgh and Manchester.

The conceptualisation, promotion and realisation of the exhibition was the brainchild of Robin Layfield, webmaster of the PHT Project’s website.

Another Stroud resident, Mark Epton designed the printed promotional material for the Project.

Robin Layfield introduced the speakers at the opening event on 17 February. Stroud’s deputy mayor, Margaret Poulton, welcomed and formally opened the exhibition. Jan Chalmers, co-chair of the PHT Project, went on to give an account of the PHT Project’s development since its initiation in 2012, inspired initially by other examples of histories illustrated with stitch, such as the Bayeux and Keiskamma tapestries.

The Tapestry is currently composed of nearly 100 panels, which, together, measure nearly 80 metres. Jan drew attention to Stroud’s longstanding production of red and blue fabric for the British army and navy with Gaza’s production of fabric for Palestinian dresses (thobes) and carpets. Jan showed contemporary examples of embroidered cushion covers made in Stroud and Gaza and the dramatic contrast between the rural panorama of Stroud and the devastation of Gaza resulting from repeated military assaults and the siege implemented by Israel and Egypt since 2006.

The family of the second speaker, Haya Awad Abdalhadi, has been in Gaza since the 1948 Nakba (catastrophe). Her grandmother was forced to leave her village (Al Khisas) in Northern Palestine, and eventually ended up in Gaza where she met and married Haya’s grandfather.

Haya is a 26-year-old English Language and Literature graduate who has been working in the humanitarian field, initially as a volunteer with Première Urgence Internationale, then, after graduation, with Médecins du Monde–France, International Medical Corps, and Aisha Association for Woman and Child Protection. She has experienced at first hand the drastic effects on daily life caused by the siege of Gaza, and she witnessed the results of the devastating assaults on the Gaza Strip in 2008/9, 2012, and 2014. She is currently studying for a Master’s degree in Development and Emergency Practice at Oxford Brookes University.

Gill Yudkin, one of the Patrons of the PHT Project, was the last speaker at the Stroud Exhibition’s opening event. She is a retired general  practitioner, who worked in inner London before retirement. Her work in the charitable sector began in Tanzania in the 1960s and continued after she retired from general practice. A visit to Israel/Palestine in 2008 under the aegis of the Israeli Committee Against House Demolitions confirmed Gill’s determination to support Palestinian people “living under the yoke of the Israeli occupation”. She joined a small, secular Jewish grant-giving charity – the British Shalom-Salaam Trust (BSST – www.bsst.org.uk), which she has chaired since 2009.

BSST makes small grants to grassroots projects that that challenge oppression and disadvantage within Israel and Palestine – for example, the Palestine Trauma Centre in Gaza , and the Arteam Garden Library, South Tel Aviv’s only community centre for asylum-seeking and migrant workers’ children and their parents (see illustration).

The opening event of the Stroud exhibition concluded with a session for questions and a stream of appreciative comments. This augured well for the six following days of the exhibition, which made clear that the hard, preparatory work had achieved more than anyone had dared hope for.

Notes in our guestbook at the exhibition

The Palestinian History Tapestry was exhibited at an all-day meeting at the British Library in London on 30 November 2019 marking the 70th anniversary of the foundation of the United Nations Relief and Works Agency for Palestine refugees (UNRWA). The event was supported by the Palestine Return Centre, the Al Jazeera Centre for Studies, and the European Centre for Palestine Studies at the University of Exeter. A star-studded programme of speakers included two PHT Patrons – Ghada Karmi and Ilan Pappé. A looped slide show was used to display on a large (LB) screen very high definition images of the 97 panels that currently constitute the Palestinian History Tapestry. The original stitched panel marking the foundation of UNRWA was also displayed.