On 16 September 1982, right-wing Lebanese militiamen allied to Israel perpetrated the massacre of an estimated 2,000 Palestinian and Lebanese civilians in the refugee camps of Sabra and Shatila in South Beirut. Those murdered were mostly women, children and elderly, and many of the victims’ bodies were found mutilated and raped. Soon after the killing began, Israeli forces surrounded Sabra and Shatila and provided bulldozers that were used to dispose of the bodies of the victims’. Years on, the Sabra and Shatila massacre continues to be commemorated, marking one of the most traumatizing events in modern Palestinian history.  Remembering also, the lesser known siege of Tel al-Zaatar (Hill of Thyme) in 1976.  As part of a wider campaign to expel Palestinians from Lebanon, a siege of a fortified UNRWA administered Palestinian refugee camp in northeastern Beirut, was carried out by Christian Lebanese militias led by The Lebanese Front. Approximately 50,000 Palestinians  lived in Tel al-Zaatar refugee camp and an estimated 4,000 were massacred. 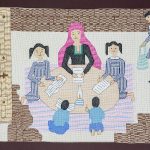