The Arab Revolt in Palestine between 1936 and 1939 was a nationalist uprising against the British administration. It demanded Arab independence and an end of the policy of open-ended Jewish immigration and land purchase. A general strike lasted from April to October 1936 and initiated a violent, peasant-led resistance movement in 1937. White and black kuffiyahs were worn for the first time as a symbol of steadfastness. The rebellion was brutally suppressed. Over ten percent of the adult male Palestinian Arab population between 20 and 60 was killed, wounded, imprisoned or exiled. The revolt caused the British to give crucial support to pre-state Zionist militias. 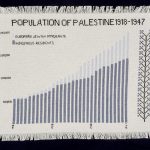