For well over a century it has been suggested that Palestine was “a land without people, for a people without a land”. This claim was repeated despite the evidence that it was a fiction. After a careful assessment of the available evidence, Fred M Gottheil estimated that, around 1875, the population of Ottoman Palestine was 492,675 (Middle Eastern Studies 1979;15:310-321). In addition to Gottheil’s report, the map stitched for the Palestinian History Tapestry draws on a map of “modern Palestine”, represented by the Mutasarrifiyatal-Quds al-Sharif (Mutasarrifate of Noble Jerusalem), which incorporated the sanjaks (provinces) of Akka and Nablus (Nur Masalha. Palestine. 2018. London: Zed, p 262). Palestinian cities, towns and large villages at that time have been identified from Gottheil’s article and Salman Abu Sitta’s Atlas of Palestine. 1917-1966. London: Palestine Land Society 2010. To mark their locations, silk crosses have been added to the embroidered Tapestry panel to indicate the locations (from North to South) of Tarshiha, Safad, Akka, Haifa, Tabariyeh, Nasirah, Beisan, Jenin, Tulkarm, Nablus, Qalqilya, Yaffa, Ramallah, Ariha, Ludd, al Quds, Yibneh, Ramleh, Beit Lahm, Majdal, Beit Jibrin, Gaza, Khalil, and Bir Saba. 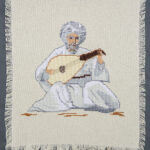