This Makam (resting place) was dedicated to a shepherd (Ra’ai) named Hassan. The tomb of Hasan ar-Ra‘i (مقام حسن الرعيعي) is located several hundred meters south of Nebi Musa.   The structure is enclosed within a wall, has six arches on four sides and topped with two domes. The Jerusalem-Jericho road was one of the primary roads passing Nebi Musa, an ancient holy site. Mediterranean Arabs made pilgrimages to Mecca past this point, and many-domed buildings mark the end of the first day’s march. 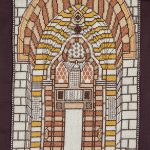