Tuesday 30 June 2020 is the centenary of Britain’s transfer of Palestine from military to civilian administration. Sir Louis Bols, of the ‘Occupied Enemy Territory Administration’, handed over Palestine to Viscount Herbert Samuel, who was Jewish and a Zionist and had been appointed High Commissioner of Palestine.

Samuel signed an informal “receipt”, acknowledging that he had received “one Palestine, complete”, as described by Israeli historian Tom Segev in his book “One Palestine Complete”.

The abbreviation at bottom left of the letter stands for “Errors and Omissions Excepted”, but clearly not the error of establishing the basis for a settler colonial state, or the omission to consult the people on whose homeland the state was to be established. 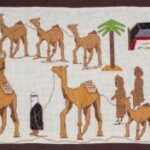